Arriving for Thanksgiving this year, in my luggage I had four cookbooks that I borrowed from a classmate along with a couple of my own. Each book contained a number of recipes for soups, appetizers, salads, casseroles, entrees, cakes and cookies, all from Germany and almost exclusively written in the german language. Keen to my desire to cook german food, my wife decided that the Friday after Thanksgiving would be my time to shine. On the yellow notebook paper, which listed the meals planned for the next few days, the heading for Friday simply read “German Day.”

I didn’t grow up with german relatives, eating german food or with any social or cultural ties to the nation of Germany or what you could refer to as the germanic nations. I did take German the first three years of high school however. Primarily because everybody took Spanish, French didn’t interest to me and I wasn’t one of the over-acheiving, straight-A, AP-track students who took Latin.

During my junior (third) year of high school, I was struck with a wanderlust and applied for the Congress-Bundestag Youth Exchange Scholarship. I did not apply to any other exchange programs, just the one, on a whim. Despite my status as an unremarkable student, my German teacher even wrote me a recommendation, which I filed in with my application and sent it off before the end of the winter semester.

I received my soft-rejection some time, I don’t remember when, early in the next year. I hadn’t been outright told to get lost, but instead I was given an “alternate” status. The program has a fixed number of slots; 60 kids each year are given the opportunity to live for one school-year with a german host family and attend german schools. My future rested on the possibility that some other high school student would decline the scholarship for whatever reason.

A couple months later I got a phone call from a program coordinator to tell me that I was “in.”

The staging point for the 59 students and 1 alternate was in Washington D.C., a short drive away at the time. As a group we had two days to: meet each other, our counsellors and to prepare for the trip. The structure of the program is such that students first fly to Frankfurt and then spend a month in Tübingen with crash-courses in German language, culture and how to survive as an exchange student in a foreign land. Perhaps most importantly of all, we were instructed on our role as “youth ambassadors,” representing the US and our respective communities once we each arrived in our different families.

Shortly after arrival in Tübingen, everybody received a letter from their new host families. Everybody except me. As a somewhat late entrant into the program, they had not actually finalized my placement when I set foot onto german soil.

When I finally was placed, I received a post-card accompanying an immensely formal picture with, maybe, 15 people in it. I was filled with anxiety and fear about what lied ahead. (I would later learn that the photo was of my brother’s confirmation, and I’ve never seen him dress so formally since).

To complicate matters further, I was one of four students placed in a formerly east german state. Out of sixty students, over 90% of us went to host families in west Germany, providing another source of anxiety.

As the month of culture shock in Tübingen came to a close, things become slightly more complicated for me. The city I was destined for, Dresden, was under water due to a once in 100-year flood. The Elbe river, which cuts Dresden into “Altstadt” and “Neustadt,” had risen 30 feet. Dresden Hauptbahnhof (main station), along with much of Altstadt, was flooded. The “usual route” to Dresden was discontinued 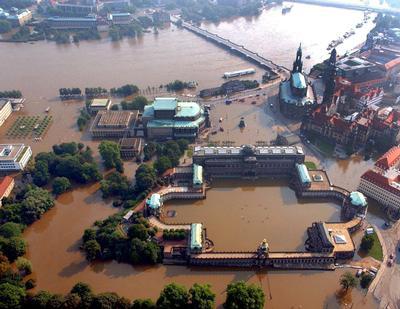 The merry band of east Germany-bound exchange students and I ended up taking slower, less direct, trains from Tübingen (south-west Germany) north, then east, then south from Berlin to Dresden. Altogether the trip took almost 9 hours, if memory serves me.

I was the last to disembark, stepping off the train with my bag in the Dresden Neustadt train station. Looking up and down the platform, I half-expected to see a stern-faced welcoming party dressed in suits and fine dresses like the picture, but nobody was there.

I stood alone, petrified. A long series of improbable events had led me from a typical middle-class suburban American life to Germany, then to Saxony and finally to this train station and nobody was there.

The platform emptied as the other passengers with people to see and places to go filed out of the station. After a few minutes, the train I had arrived on departed.

“What the fuck have I done?”

Slowly turning around, I caught the gaze of an auburn haired older woman on another platform. Her eyes opened wide, she started waving and shouted “Taylor!”

In this particular program, the exchange students are expected to attend school with their host siblings. Pairing up with a host sibling helps ease the terrified exchange student into a social circle and helps orient them into the class schedule, structure and so on.

My (host) brother Franz went to the Mittelschule (also known as Realschule), which is typically the track in the german educational system where pupils are prepared for a technical or vocational career, think electricians, plumbers, lab techs, etc. I would later learn that of the 60, I was the only exchange student not attending Gymnasium.

I enrolled in all the same classes as Franz, with one exception, I had a German class with the grade 6 students (aged around 11-12) who were studying grammar. The school building was a GDR/DDR-era building, big, blocky and built entirely out of cement. Inside were a hundred or so german students, who all seemed to know me, the only American they had ever met.

In mid-autumn I started to experience migraines. Every day after school my head was pounding and I felt exhausted. A side-effect of being in the eastern part of Germany at this time, in this little town, was that nobody spoke English. I had been reading, hearing and speaking nothing but German for almost three months nonstop. (In a mid-year meetup among exchange students we discovered that everybody had these migraines, ostensibly from working overtime to translate everything in and out)

My dreams started to be in German.

If you’ve only ever spoken one language, dreaming in a different language is perplexing to say the least. Somewhat less perplexing than what started happening next.

When you point to the door, you don’t think “what’s the word for that..door!” Language is the currency spent in the process of constructing conscious thought, and when you are immersed so completely, things get funky.

In one of my rare phone calls to my parents in the US, my mom asked me what I was doing and I replied “nothing, just looking out das Fenster” (das Fenster_ is german for “the window”).

After this conversion, the migraines subsided.

Clearly ecstatic about receiving a Räucherman for Christmas

In the spring, the nation that sent me to Germany invaded Iraq. As the sole American that the students and teachers from my school knew, I became an involuntary diplomat simultaneously trying to understand and defend my country’s foreign policies.

In my history class up to that point, we were discussing the road to fascism and war that Germany traveled in the mid-20th century. A number of times I was challenged on my previously held beliefs around American Exceptionalism and watched as parallels were drawn between the usurping of executive power in the old Weimar Republic and an eerily similar usurping of power by the executive branch.

Seeing the dramatic actions of my country from a new and different perspective made defending those same actions much more difficult than they might have been the year prior.

Disenchanted from the America I had left behind, I began to feel less American.

“What does that even mean? What is it to have a national identity? I never explicitly chose to be American, it just kind of happened to me. If I got to choose to be “something” would I choose American? Am I American just because my family is American?”

All peculiar questions to ask yourself at 17.

Too much German culture

By the end of the exchange, I had my “Germany Mutti” (her words), “Vati” and my german brother Franz. I had a german hometown, went to a german school, visited a german hospital (whoops), kissed german girls, rode german transit, went to sleep german-drunk and woke up german-hungover.

To my german friends I was the American. Returning to a new school in the US, I was the German.

Over ten years after the exchange, I find myself expending a tremendous amount of energy ensuring that I maintain fluency in German. Having recently realized that, while my german parents don’t speak English,if I lose the language I lose them.

With the renewed efforts the conflict of identity returns.

Do I really need to choose?