The Jenkins project is currently undergoing a major infrastructure migration to Microsoft Azure as our primary infrastructure provider, and as a result, I have been spending a tremendous amount of time getting friendly with Azure tooling.

Azure gets a lot of things right, I would argue more things right than AWS, but they also get a few things wrong. One of the more frustrating things that Azure gets wrong is their AWS CloudFormation-equivalent tool “Azure Resource Manager” (also referred to as “ARM”). The implementation of ARM and distinction of “Resource Groups” in Azure’s conceptual model is superior, in my opinion, to anything AWS currently has, but the mimicking of CloudFormation by defining ARM Templates as JSON is utterly annoying.

JSON is a machine-readable format, it is not a human-readable format and its use by various vendors as a “configuration format” is misguided at best. While the (mis)handling of trailing commas is annoying, the lack of inline comments is abhorrent.

Based on a suggestion by my former colleague @jotto, the Jenkins project no longer has any ARM templates written in JSON. 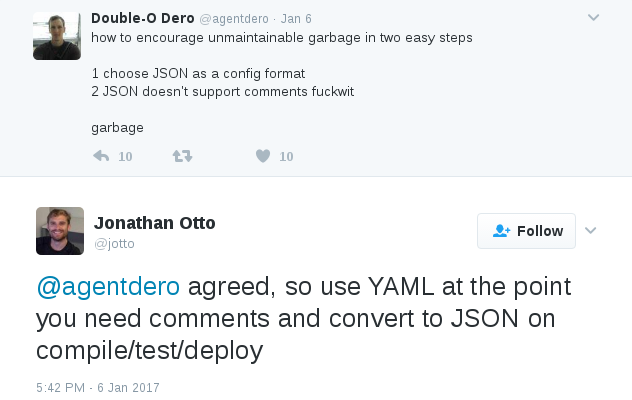 Our jenkins-infra/azure repository nowcontains all the tools necessary to make this viable but in short, we use a script (yaml2json) and GNU/Make targets to convert all the .yaml files in our arm_templates/ directory to .json files for deployment into Azure.

The key script is called yaml2json which is a very simple Python script for taking a list of .yaml files and outputting their equivalent .json files in the same directory:

Obviously very simple, but it requires the yaml module which for some reason still isn’t included in Python’s “batteries included” standard library. To make sharing and re-use fo this script easy across contributors, I added a Docker container to the jenkins-infra/azure repository.

We generally assume that everybody implementing Terraform plans and ARM templates has Docker installed. Frankly, I cannot imagine doing any kind of operations/infrastructure work without a local Docker daemon running anymore, so it’s not a high bar to pass.

To run the yaml2json script effectively, we have a wrapper script which will build a Docker container if it doesn’t exist and then execute Python:

I would consider the script above a hack, and wouldn’t use this approach for anything of any major consequence, but inlining the Dockerfile and building a container with a single Python package installed needn’t have too much supporting infrastructure around it.

With the python-with-yaml script implemented, the Makefile cleverness can then be added to tie everything together and ensure the .json templates are generated before we attempt to deploy anything to Azure.

Since we are already using a Makefile for validating and deploying our Terraform plans, it makes sense to extend our Makefile implementation to ensure that the YAML templates are converted to JSON before deploying anything.

The Makefile is short, but uses some features not known to many novice or intermediate GNU/Make users. The first two targets are all that really need explaining here:

The first defined target is all, which is a Phony target, includes a clever path substitution (patsubst) when defining its prerequisite targets. The wildcard will list all .yaml files in the directory and replace the .yaml with a .json at the end. In essence, if database.yaml exists, there will be a prerequisite for the target database.json in Make.

Experienced Make users will recognize this pattern for generating prerequisites automatically. Given the above example file, database.yaml, this will create a target for database.json which itself has a prerequisite for database.yaml. Defining the database.yaml prerequisite is important as changes to that file will cause the next make invocation to regenerate the .json file. In most compilation-based environments, this approach is what effectively supports “incremental compilation.” The rules for the target itself simply use the $< variable, which is an automatic variable, for the name of the first prerequisite (i.e. database.yaml), allowing yaml2json to be invoked properly.

Combining these three scripts has removed much of the frustration I have been having with ARM templates over the past few weeks. In addition to being more human-readable, YAML’s support for inline-comments means that contributors, such as myself, can easily explain what is happening in our more complex templates and why.

Don’t let JSON make you cry, YAML is just a few scripts away!