Automation is a wonderful thing, and for the past eight or so years, I have been a heavy user of [Jenkins](https://jenkins.io() as my hammer of choice for just about every nail I needed to automate. There’s one dirty little secret about Jenkins however: it’s a godawful nightmare to try to automate.

My pal Josha Hoblitt and I have tried to make automation of Jenkins configuration slightly less painful for Puppet users with the puppet-jenkins module, but that’s still rather hackish. To this day, the most effective way to automate configuration in Jenkins is to use its built-in Groovy scripting support and the little-known feature of loading scripts from the init.groovy.d/ directory.

The init.groovy.d/ directory is an optional directory you can create in JENKINS_HOME, typically /var/lib/jenkins. The directory can be filled with Groovy scripts which Jenkins will run when it starts, after it has loaded plugins, but before it starts servicing user requests and scheduled workloads. The Groovy scripts in this directory are effectively the same as one might execute in the Script Console or via the groovy CLI command. 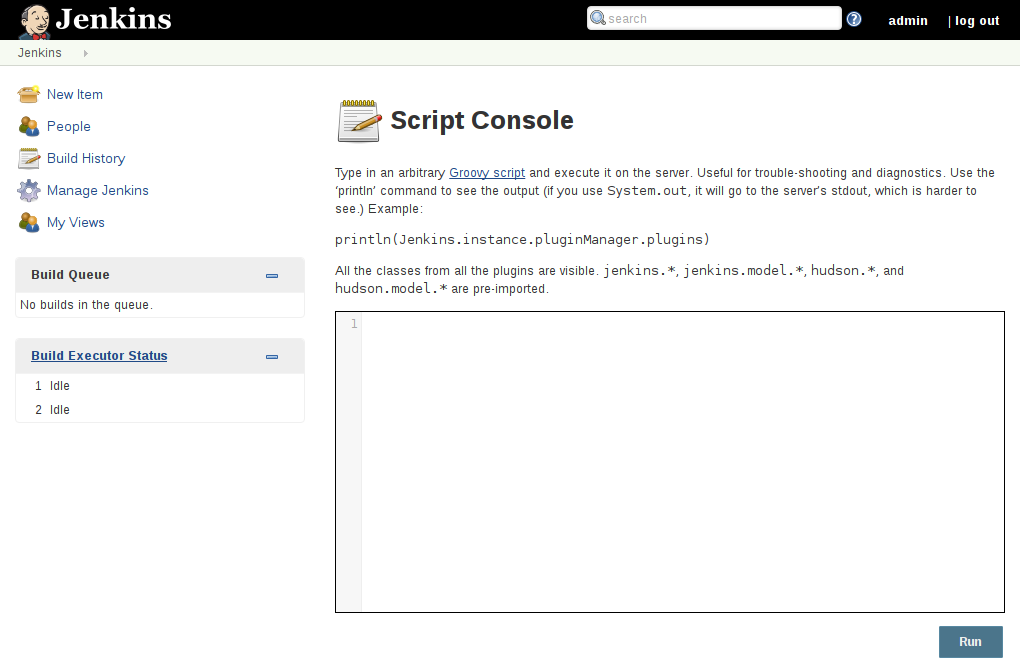 “Cool!” I’m sure you’re thinking, but slow down there buckaroo. Developing these Groovy scripts, as luck would have it, is painful. The Groovy scripts manipulate internal state of the Jenkins instance, by constructing objects and executing methods on Jenkins’ own object graph.

Here’s a simple example which sets the number of executors on the master to zero:

Experienced Jenkins users and administrators might be familiar with all the .xml files which litter JENKINS_HOME. “XML, that’s used for uglier versions of JSON documents right?” In most other cases, this is probably correct, but not in Jenkins. In Jenkins, for the most part, these .xml files are XStream serializations of objects; they are not typical XML documents. Some slices of the object graph in Jenkins is serialized and written to disk. It’s kind of like Smalltalk, but with the JVM and XML.

So these Groovy scripts must manipulate the object graph in Jenkins in order to accomplish anything, meaning that the poor sap who tries to automate Jenkins must understand Jenkins internal APIs in order to be successful! Yay! Here are some tips help:

This will map my current directory’s init.groovy.d into the approprate path inside the container. I also map in jenkins-tmp so I can inspect .xml files after runnign Jenkins, and finally I disable the new installation “Setup Wizard” making iteration easy.

Whenever I’m satisfied that my scripts are doing the right thing, I’ll stop the container, and restart it so it loads my script like any other “pristine” Jenkins.

Think of the Jenkins web UI as a pretty way of interacting with the gnarly object graph underneath. By making changes in the web UI, and then inspecting .xml files for the changes. Finding the right .xml file matching the right web UI settings requires a little bit of guess and check, but here are some rough pointers

If I look at the file hudson.plugins.git.GitSCM.xml after configuring some Git specific settings, it contains:

Which gives me clues to which Javadocs to look at for API signatures in my Groovy scripting. I’ll be looking for a class named GitSCM and its constructor agruments.

In the example above, I would refer to the Git plugin’s Javadoc and start digging around in there. This is probably the most challenging stage of developing Groovy automation for Jenkins, figuring out which classes need to be constructed and which methods might need to be called. A lot of experimentation is needed here, which is where the Script Console comes in.

Prototyping in the Script Console

Once my little bit of groovy is working as expected, I’ll commit it and move onto the next item.

Automating Jenkins isn’t easy but if you know where to look, it doesn’t need to be impossible either. The nice thing about the Groovy approach, as I have used it in the past, is init.groovy.d/ can run at the instance’s boot time, and then I can use the same file, run it through the groovy CLI command and ensure that the instance’s settings are correct.

I hope you have found this brief reprieve from gardening blog posts useful!