I consider myself one of the world’s foremost experts in terrible ways to use Jenkins, partially because my brain is awash with awful ideas, but also because I have been around the project long enough to see hundreds of different “clever” (ab)uses of Jenkins. Today I thought I would share something I came up with a few weeks ago which, to date, might be one of my more deplorable creations.

If you are responsible for a Jenkins instnce, please ensure your plugins are upgraded in accordance with this security advisory immediately.

Jenkins, like many other CI/CD tools, runs code typically stored in a source control repository. If you cannot trust people to run “arbitrary” code in your CI/CD environment then you should reconsider whether you trust them to commit to the repository. This is especially important with pre-merge validation like that conventionally performed on pull requests. If running “arbitrary” code on your CI/CD infrastructure makes you queasy, I strongly recommend reconsidering your security model, particularly how long instances live, and where secrets are stored.

Jenkins Pipeline is an incredibly useful tool for codifying continuous delivery pipelines in code (Jenkinsfile). Made popular with the Jenkins 2.0 release last year, I can honestly say that I no longer allow “Freestyle projects” in the Jenkins environments I manage. It’s so fundamentally better than what preceded it, that I do not wish to ever return to configuring jobs manually in Jenkins.

Jenkins Pipeline exists in two forms, Declarative and Scripted Pipeline, both of which are, in essence, domain-specific languages. Also known as “code.”

Since it is just “code”, it can be abused! Lo and behold, Pipeline Shell:

The Scripted Pipeline above (ab)uses the input step which blocks the executing Pipeline until a user provides input. The input step is fantastically useful for authorizing a deployment or providing some form of user input mid-Pipeline. With some built-in semantics of Groovy, I can loop over the input step, and naturally, this means I can run an infinite number of commands. Additionally, as the screenshot below demonstrates with Blue Ocean, execute the command and receive the output from a machine in my Jenkins environment. 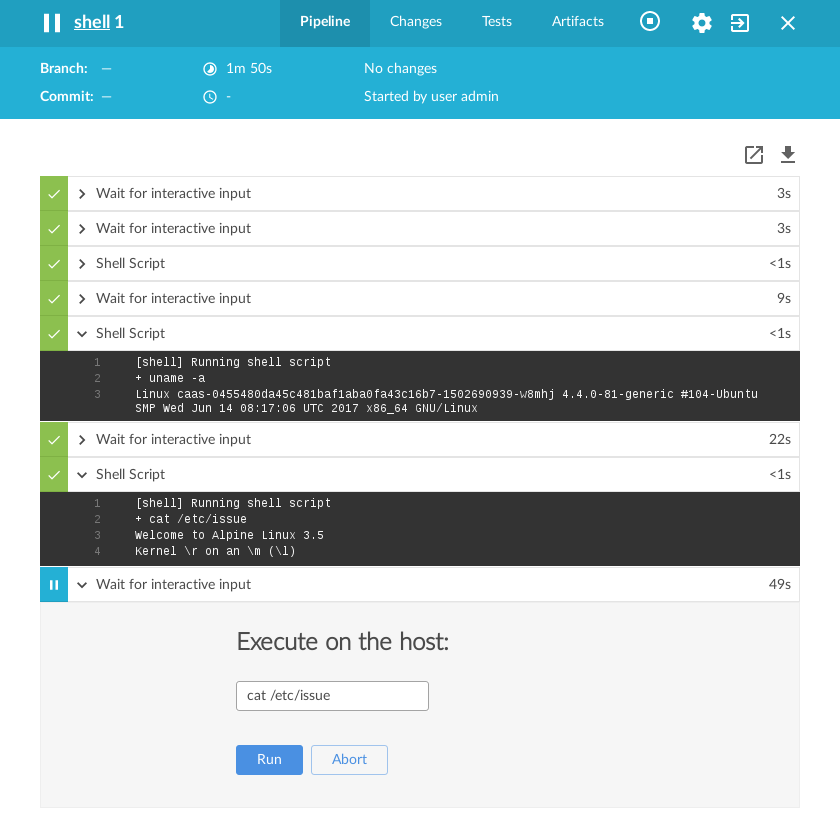 How unabashedly awful. At the same time, I can think of a good half-dozen ways in which this pattern can be very useful too! With great power comes great… something or other.

For example, if you have ever had to debug issues on a long-lived Jenkins agent hosted behind a firewall (or something which runs an agent but has no sshd), this could be very helpful! Of course, if you’re trusting a firewall to provide some protection against the workloads running on a Jenkins agent, this coulde be very terrifying (and, by the way, your security model would be incorrect if you’re relying purely on network security here).

Or perhaps the build takes an eternity, and something goes haywire, but only in Jenkins, right in the middle of the Pipeline. Dropping in this little input loop gives you a tool to investigate the agent’s filesystem and state mid-Pipeline run.

Or what about when you’re bored, and you just want to watch the world burn?

NOTE: Don’t ever run any CI/CD workload from a developer on a network who you wouldn’t trust to have direct access to said network. You’re running “arbitrary” code for crying out loud.

Regardless of how you feel about this abuse of the Pipeline DSL, please consider how you felt when your eyes scanned over the dozen or so lines of Scripted Pipeline. If this made you feel nervous please remember that:

Your CI/CD environment should work with this assumption as a central part of the security model. If you cannot trust the Jenkinsfile from the source repository, why can you trust the Makefile?

I strongly recommend this presentation from Blackhat a few years ago. While some of the criticisms of Jenkins were fixed as of Jenkins 2, the fundamental security concerns of running “arbitrary” code on machines is still relevant to the discussion here.

People sometimes joke that Jenkins is “cron with a web UI”, but I will typically refer to it as “remote code execution as a service.” A statement which garners some uncomfortable laughs. If you’re not thinking of CI/CD systems like Jenkins, GoCD, Bamboo, GitLab, or buildbot as such, you might be sticking your head in the proverbial sand, and not adequately addressing some important security ramifications of the tool.