The traffic on the Bay Bridge connecting San Francisco to Oakland is one of the most congested routes of traffic in all of Northern California. Somehow it gets even worse on Saturday and Sunday. One weekend, a few years ago, I was driving my wife and some of the women from her soccer team back to Berkeley, from a game in San Francisco’s Golden Gate Park. On the east side of the bridge, before inching onto I-580N, I was pretty pissed off, and half-joking half-frustrated shook back-and-forth at the steering wheel “GAHHHHHHHHHHHH.” The woman sitting behind me, who was certainly the “funny one” of the group, put her hand on my arm and gently said “Tyler, this is your reality now.”

Certainly a well-delivered line, perfect timing, received with laughter all around, but the phrase has stuck in my memory longer than the woman’s name.

My last post I wrote as a way to process and capture the trauma of watching fire rip into northern Santa Rosa. A town I have adopted and which is the subject of a number of picturesque photos I have posted over the past three years, always titled with my unofficial city motto: “Santa Rosa: It’s nice.”

The day after I wrote that post, I ended up at the Chimera Arts and Makerspace in Sebastopol, the little hippie town west of Santa Rosa, where I joined a fledgling effort called Sonoma Fire Info. I took the remainder of the week off from work, and our little volunteer organization rapidly became a clearinghouse for verified information across the county in its time of need. Soaking up the efforts of over 60 volunteers who made thousands of phone calls, scoured social media, and captured truth amid the chaos. In a two week period, the website had been viewed by over 100k people.

I think we did a great job of informing Sonoma County. The rest of the country, and world, remains frustratingly less informed about an event from which my adorable little city is going to take years to recover.

The fire that I watched whip down the hillside is known as the “Tubbs Fire”. The fire that I could see from miles away on Llano Rd during our voluntary evacuation to Sebastopol at 3:45 that morning is known as the “Nuns Fire.” While I saw both of these with my own eyes, there were four other fires, of various sizes, engorged by 50-70mph winds, raging in Northern California:

At one time there were six active fires in the part of Northern California north of San Francisco and west of Sacramento. To put this into a historic context, four of those six fires rank in the 20 most destructive (structures destroyed) wildfires ever recorded in California history: 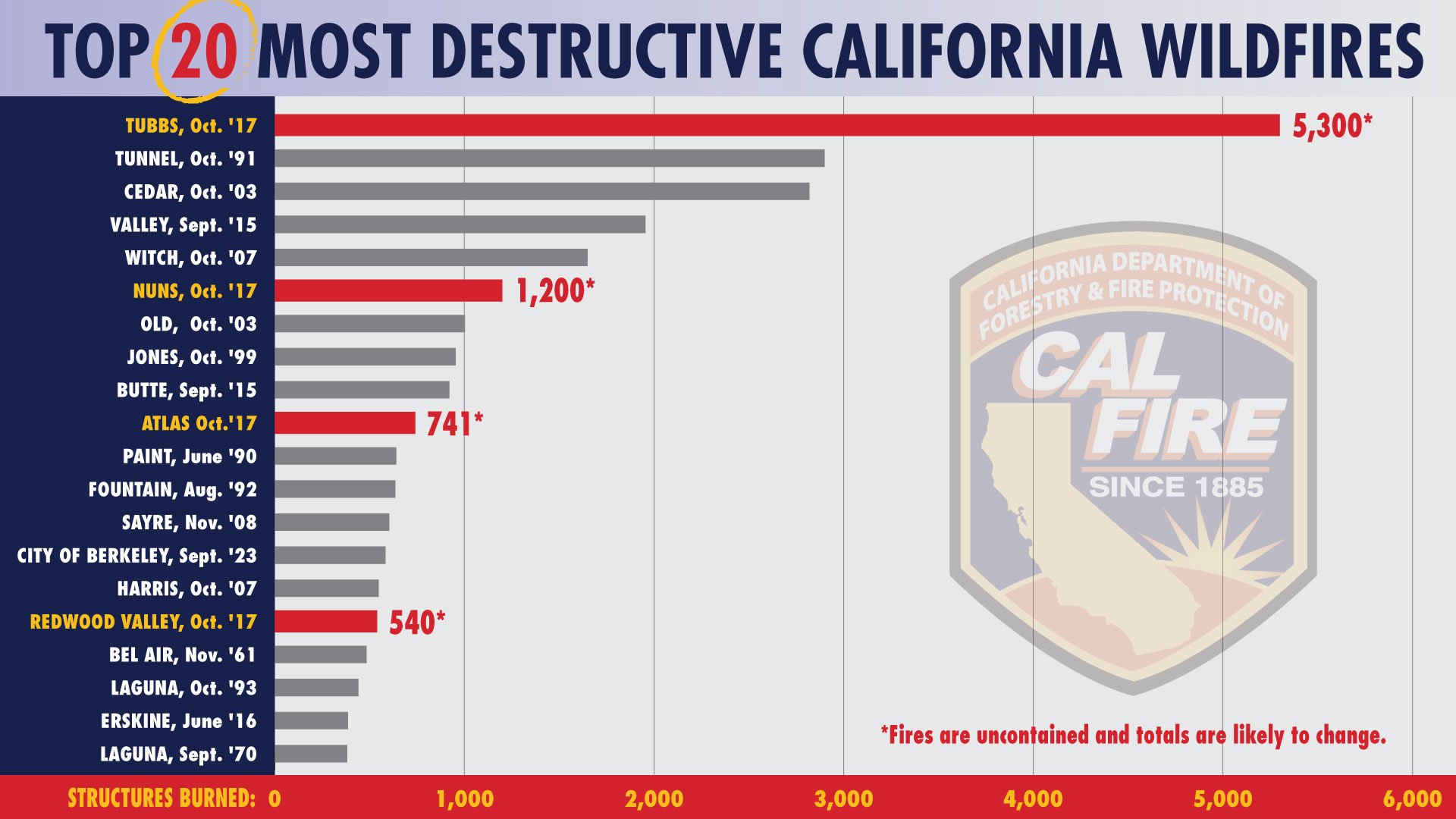 (posted by @CALFIRE on October 20th)

The impact on Santa Rosa, in particular, from this unfathomably big fire cannot be understated. Considered the fifth most populous city in the “Bay Area,” with just over 170k residents, it lost 5% of its housing in less than twelve hours. The gale-force winds which woke me up at 12:30am on October 9th pushed the fire through neighborhoods, across 4-6 lanes of Highway 101, and through hundreds more homes before it could be stopped, all in a matter of about 8 hours.

We returned to our house the Thursday night after the fires started, exhausted. After a full day working at Chimera on Sonoma Fire Info, and some dinner that Friday, I holed up in my office and continued scouring the internet for news and updates when I startled at the sound of water falling on the tin patio roof.

My first thought: “did a water-tanker helicopter just fly over?” Followed quickly by “no fucking way, did it start raining!?” Bolting out the front door, I was disappointed to learn it had not started raining, but then was bemused to find my neighbor, watering my house.

I can understand the compulsion to water down the house “just in case” in areas near wildfires, but this wasn’t a “just in case” rather, my neighbor caught an ember burning on my roof earlier in the week. He had since taken to watering both our houses a couple times a day.

I also learned from my night-owl of a neighbor that he had been sitting on my corner-lot house’s porch, and brandished his pistol a few times at some cars which took an especially slow roll through our neighborhood, not about to let any thieves take advantage of the situation.

The CALFIRE maps show that we are almost exactly one mile south of the last structures completely destroyed by the Tubbs Fire.

This was close, terrifyingly close.

The next Monday, a week after the fires broke out, I return to work, to questions of “are things okay?”

Everybody in Sonoma county who didn’t lose a house, knows somebody who did. Thousands of people will have to wait until early 2018 for the EPA to remove thousands of tons of toxic ash and debris, requiring a clean-up operation of unprecedented size, before they can begin to rebuild. Large portions of Sugarloaf Ridge State Park are burned, the majority of Annadel State Park is destroyed. Most of the little Sonoma Valley towns I drive through on my way to Napa have suffered severe damage.

This region, this adopted home of mine, is scarred in places beyond appreciation for many Americans, including some who live here.

Much as I would like to wallow in that frustration and despair, there is no direction to go but forward. There is nothing that will undo what has been done, nothing will make this “okay.”

There is no option for Sonoma county, and Santa Rosa, but to enjoy the warmth of the autumn sun, pick up the pieces, and to rebuild.

“This is your reality now.”