Of all the bizarre things to have happened in 2020, my winter garden may be one of the more benign occurrences. I started gardening seven or eight years ago in Berkeley. The long backyard with excellent sunlight rewarded me with incredible tomato harvests summer after summer. Autumn became the time when everything would get thrashed or covered up to lie fallow through the wet winter months in Northern California. After moving to Santa Rosa, my gardening became much more serious but still packed it all in around October/November. The last few winter seasons I have tried a winter garden with little success, but this year the winter garden is astounding.

Santa Rosa is hardiness zone 10a and has a climate which allows for a substantial growing season; sometimes I’m harvesting from April to October. The winters however are unpredictable. This season we didn’t get rain in October, or even really into November as we might normally expect. When amounts of rain finally showed up in December, it was a few days of soggy ground before the skies turned clear and the humidity plummeted. Moisture aside, the frost and ground temperature are also unpredictable. We have had days of 70-80 degree weather followed by nights at or just under freezing temperatures. Despite some frigid nights, it’s highly unlikely that the ground will ever hard freeze in Santa Rosa.

Growing in these conditions is challenging, and in previous winters the snow peas were the only thing that really succeeded.

It’s January and I am astonished that the garden is still going, let alone flourishing! The types of plants selected for the winter garden were all plants that could handle mild frosts.

This year, around September if I recall, I planted: 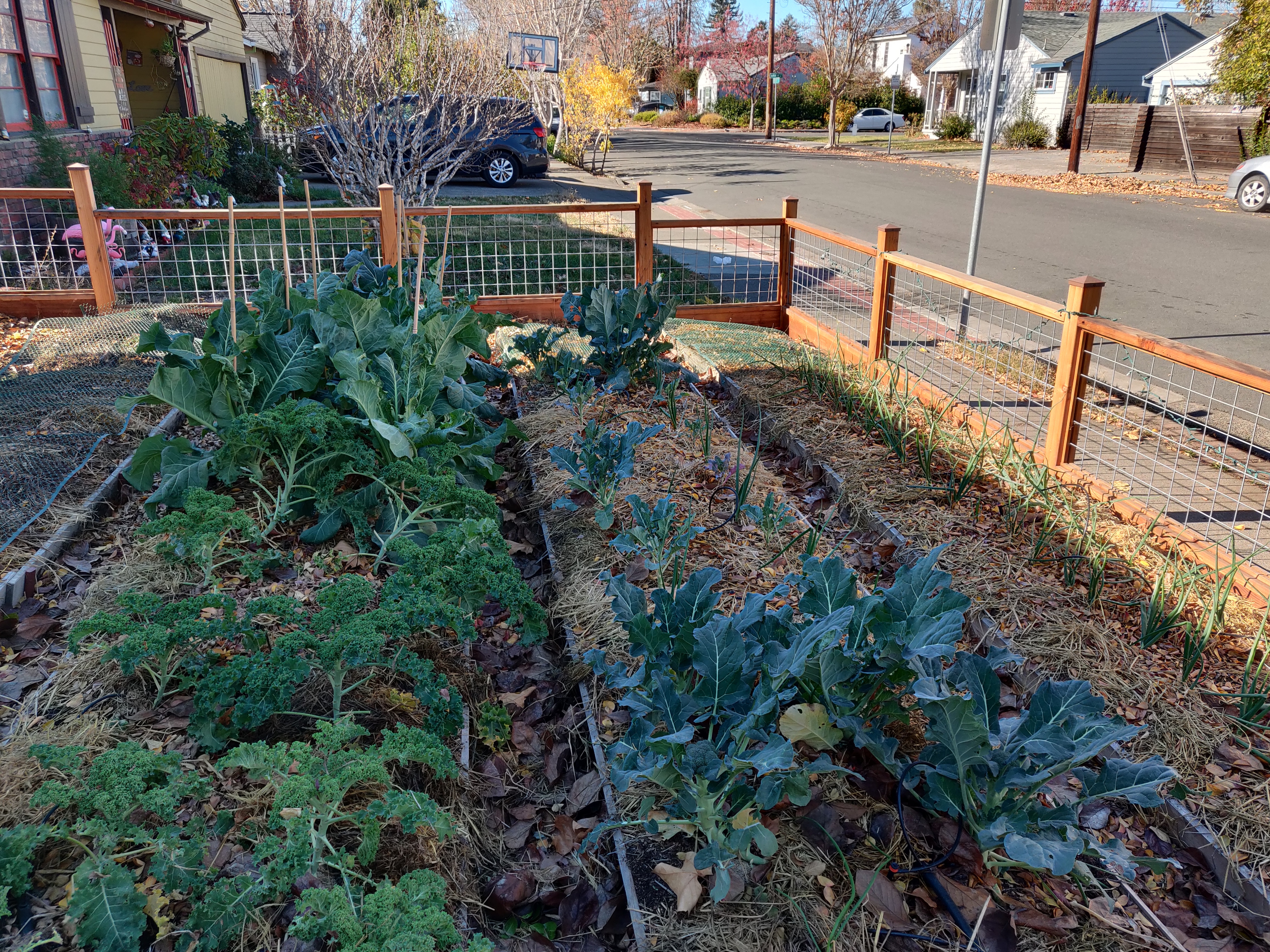 Unlike previous winter garden attempts, all of the above were starts purchased from a nursery. The autumn ground temperatures are too unpredictable to germinate seeds effectively.

Fortunately, the temperatures and sunlight were strong enough in September to get the starts really going before colder weather set in.

Aside from the weather, the big challenges that the garden has faced this winter have all been somewhat predictable but I didn’t anticipate them having the effect on the plants the way they have.

For example, with big leafy greens you always have to worry about predation, typically from bugs like moth caterpillars. Early in the autumn I feared that deer were also munching away on the curly kale. By chance I was admiring the garden through the window one early afternoon and saw a fat grey squirrel sitting happily in the row, chewing away on my kale! Slamming open the window I shouted at him as he scurried off across the street. I have since made sure to throw sticks at any squirrels I see even so much as glancing at my garden.

After the squirrel-incursions, the end of the fire season brought strong and sustained winds to Santa Rosa. Fortunately none of the plants were too tall as to snap at the time, but the cauliflower was still blown around quite dramatically. I ended up staking numerous plants to ensure they continued to grow properly after the winds subsided.

The last major challenge, which I should have known about but just forgot I guess: sunlight is different in winter. Our garden runs east/west on the north side of the house. In the northern hemisphere the sun dips lower to the south during the winter. The result is only one bed sees strong direct sunlight for more than a couple hours a day. I believe the lack of sunlight is responsible for some of the inconsistencies I’ve seen in broccoli plant growth during the fall and winter. Broccoli is the only thing which I’ve planted in a full row, and the plants in the middle of the row look rather anemic when compared to the ones at the end which receive good morning and evening sun respectively.

For whatever reason however, none of these challenges have prevented a number of beautiful plants from growing, including the first successful broccoli harvest I have ever had! 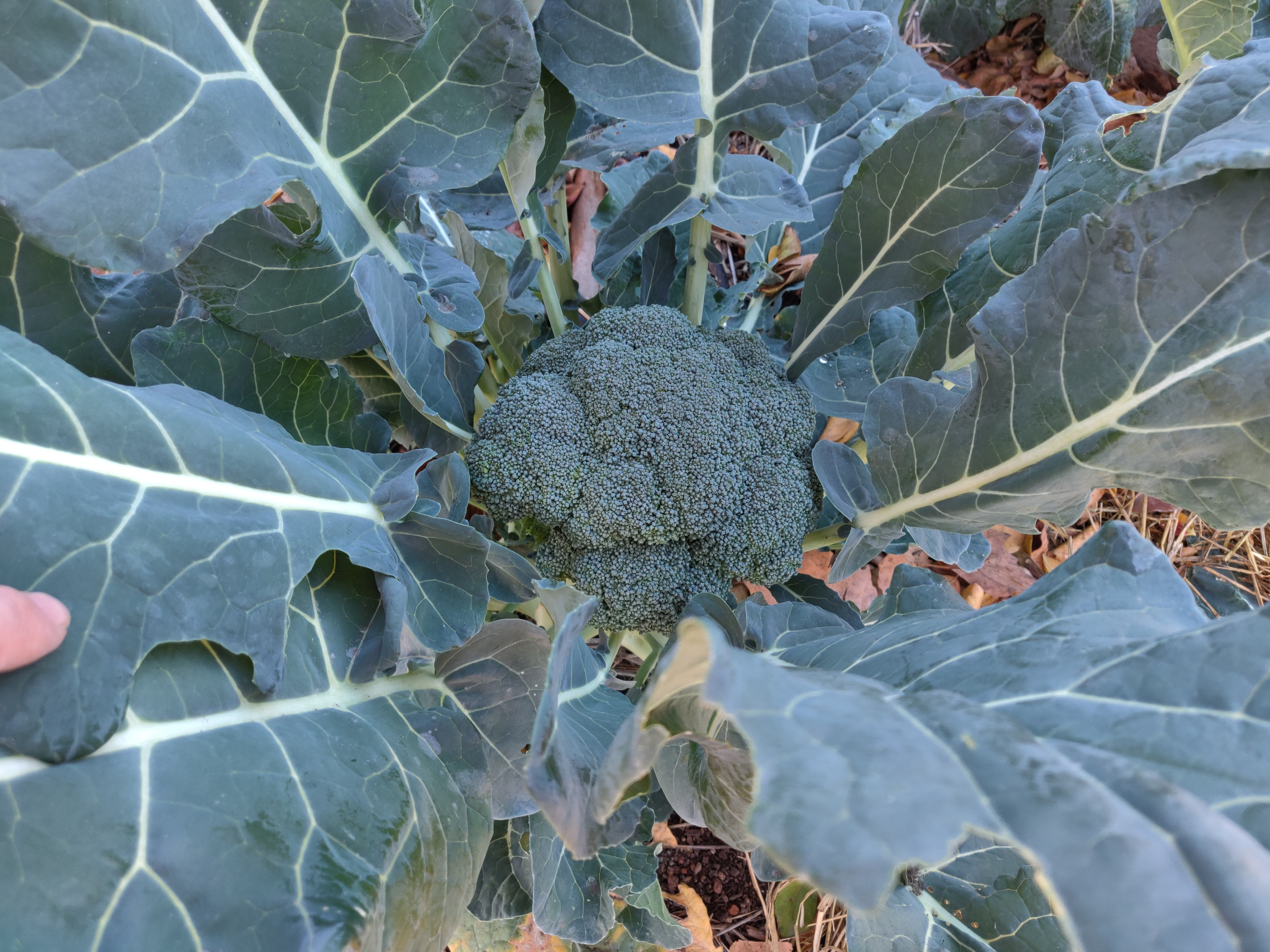 If you have never had broccoli fresh from the garden, it will forever change the way you perceive broccoli. There is notable bitterness in store-bought broccoli when compared to fresh. I wouldn’t call it “sweet” but it is a very pleasant vegetable straight from the garden.

Kale is also far better fresh, but then again what isn’t.

Just recently a couple of heads of cauliflower have also started to show up, which I haven’t yet harvested. These will be interesting because the head must be protected from sunlight in order to maintain it’s good yellowish white color and flavor.

The onions will certainly not be harvested until early spring, but the leaves are almost all looking strong.

For a number of reasons, I cannot wait for spring!

My “normal” winter routine is to work on the soil for the following planting season. This includes aerating, dressing with straw mulch, and keeping moist. This season is a little different since I have plants in the ground and very little of the garden is lying fallow. Nonetheless, all the beds are dressed with straw mulch. I have also been taking more of the fallen leaves from the trees lining the sidewalk to incorporate more compostable matter into the beds and walkways. Hopefully the earthworms I introduced into the soil have avoided the birds and are happily eating away at the decomposing material in the beds.

When spring arrives, I will take another delivery of fresh compost and pile it on top of whatever “green manure” is left on top of the beds, setting the stage for the next growing season.

All the vegetables I grow in my garden can be considered organic. I only very rarely have to use any form of (organic) pesticide, like that which I used last season to curb powdery mildew on the zucchini. From a plant nutrition standpoint, I do sparingly use an organic fertilizer for the hungrier plants, but I have been using the same 25lb sack for almost a year now.

Neighbors have asked me how my garden does so well: it’s the soil.

If I really think about it, the vegetables are secondary, what I’m really growing here is dirt. Teeming with life, rich and productive dirt.

My hope is that by continuing to invest in this soil, it will continue to give me delicious vegetables year round.