Last time around I didn’t train well enough, got sun blisters on my lips, and broke my bike. This time around I could not be more excited for AIDS/LifeCycle to be back for 2022. The goal of AIDS/LifeCycle is to raise funds for the San Francisco AIDS Foundation and Los Angeles LGBT Center, both of which provide numerous critical services to their respective communities. For my inaugural year in 2019 I was incredibly fortunate to raise over $6,000 and this year I am shooting for $10,000. I am also training a lot more intelligently this time around, I’m aiming to have a great time in 2022 and a strong mind and body will be key to that!

I’d appreciate your donations by the way.

I also enjoy writing about my transformative experiences, like that time I got my pilot’s license or my review of the ALC 2019 ride. This time will be no different! If you follow me on Twitter I will be posting progress under the #AIDSLifeCycle hashtag. I will also do my best to share training ride recaps on this blog as I progress along!

The first official ride of my ALC training was a quick 28 mile jaunt from Santa Rosa to Petaluma and back. I have done this route a number of times but had not ridden my road bike in over a year! After my bike broke in ALC 2019 I was pleasantly surprised that Bianchi honored the original warranty and I was able to get a good discount on this wonderful aluminum tube, carbon fork, Impulso All Road 105.

Note: I posted this Twitter thread during the ride with more pictures

Setting out on Saturday morning the sky was overcast, the streets damp, and a mist in the air. It was perfect. I glided through Santa Rosa with such excitement that before I knew it was on the south side of town pushing into the countryside. Between my excitement and the lightness of the bike, everything felt so smooth.

Riding east of Rohnert Park between Santa Rosa and Petaluma is fairly flat and most of the roadway has ample shoulders. Too many county residents have a bad habit of leaving their trashcans in the shoulder which presents a hazard for passing cyclists like myself. Fortunately however the misty morning seems to have kept lots of traffic off the road and I could pop out into the lane with relative impunity.

As I rolled into Petaluma, I genuinely considered straying from my route since everything thus far had been so easy. I had a very hard cut-off time for my ride which kept me disciplined and on track however. I had only been out about an hour and already made it to Petaluma, much faster than I thought I would be! Turning north back towards Santa Rosa on Stony Point Rd, where no shoulder exists for about a mile, I hugged the white line as I progressed towards the Cotati Grade. The long sloping road is more pronounced for drivers on Highway 101, for cyclists riding to the west on Stony Point it’s less steep but lasts longer.

At the top I paused by the Washoe House for a banana, photo, and some stretching before continuing back into Santa Rosa. 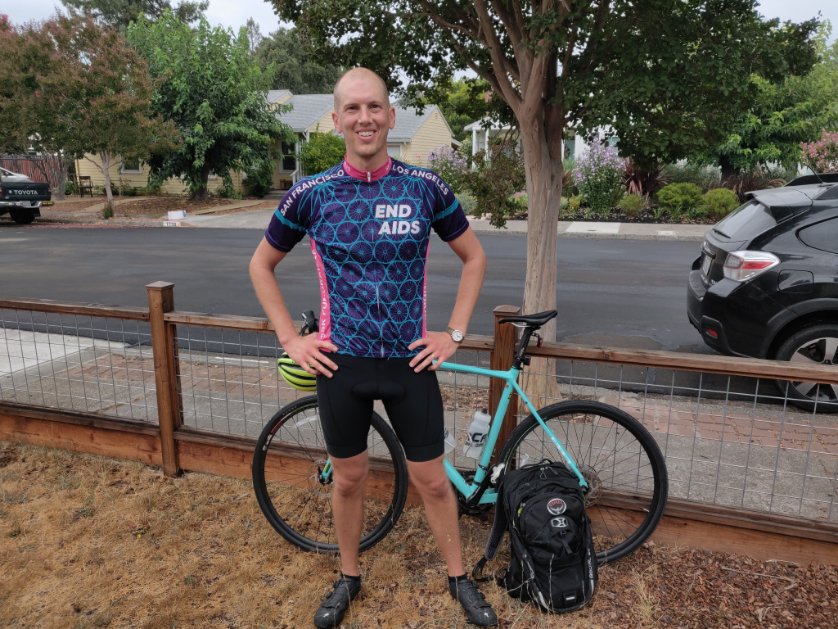 When I arrived home I was kind of shocked that:

All said and done, 28 miles is not that much compared to the 545 from San Francisco to Los Angeles, but it’s a start!

This weekend I decided I needed to up my mileage and really test myself. This was a good idea in theory, but there were a number of environmental factors that really made my trip a bit more than I bargained for. I decided to do the Sebastopol / Valley Ford from the Santa Rosa Cycling Club, which starts in Sebastopol. If you’re not sharp on Sonoma county geography, Sebastopol lies a few miles west of Santa Rosa, meaning to start my ride, I would first need to head west. I did not consider that from my starting point to the route’s starting point was already a 9 mile trek. 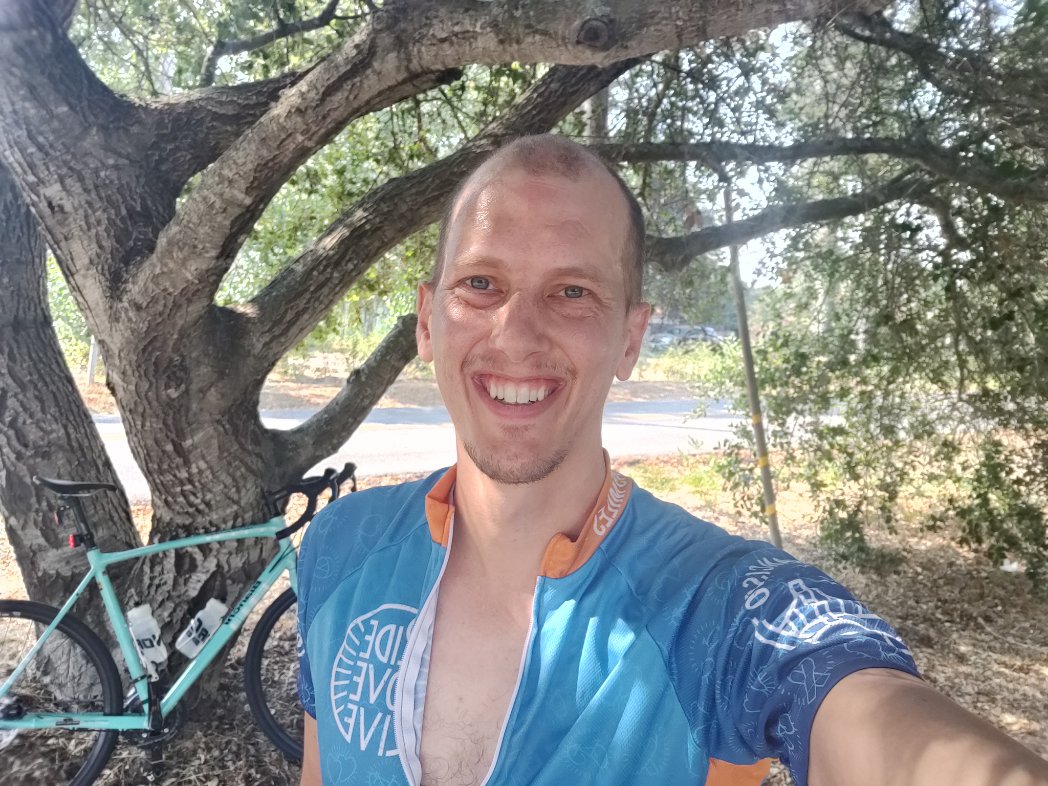 I stopped at the route’s starting point, the Ragle Ranch regional park and had something to eat and drink. It was later in the morning than I wanted to have started my ride, and it was already pretty damn hot. I had packed a long-sleeve shirt and a wind-breaker vest in my backpack and it was already abundantly clear that neither were going to be necessary.

Fortunately I had the foresight to pack additional sunscreen and lots of food.

The first stretch of the route was mostly enjoyable with a pretty sharp climb from Graton into Occidental, along a road with barely any shoulder and plenty of turns for cars to take too close. The route on Strava listed that climb as a “Category 4 Climb” which I assume means it’s tough, because it was tough.

Persistent cyclists are rewarded on the downside of the slope with a quick descent into Occidental and a break! While in Occidental I’m glad I stopped into a market and purchased both an electrolyte drink and another bottle of water. Topped my bottles off and put the remainder into my backpack. The cyclist club’s route explicitly has a stop at the Union Hotel in Occidental, but it’s only 8 miles into a 38 mile route. That means the hard part of the ride is all at the beginning right?

Note: I posted this Twitter thread with a lot more pictures from the ride.

Heading further into west county I was increasingly annoyed that the air was smokey, hot, and the roads less than pleasant. Without a cell phone mount on my bike, I was going off turn by turn directions that I had transcribed on a sheet of notebook paper stuff into my shirt pocket. I had to stop a few times to cross check where I was, one particular hill I started going up was a 15% grade. I stopped to double-extra check that I was still on the route.

Most of the ride around Valley Ford was desolate. Nothing but a few cows, brown hills, and an increasingly annoyed cyclist on a pretty teal bike.

I stopped on the corner in Bloomfield, around the 30 mile mark and sat down. The heat was oppressive, some of my food had melted in the packaging. My water bottles, one with water the other with electrolytes, were filled with the last of my supplies. I reapplied sunscreen.

Climbing out of Bloomfield the road was starting to get a little bit more busy with car traffic and the quality of the asphalt was degrading. My ass hurt. Every one of the hills seemed to be in the most inconvenient spot. Curves with poor visibility, potholed pavement, or zero shoulders.

I was so tired of drinking piping hot water.

As I crawled slowly back into Sebastopol I had to keep reminding myself that my legs would take me home, I just needed to be mindful of my temperature and mentality. I thought about my relative in Sebastopol who could give me a ride home if I needed it. When I finally got back to the head of the Joe Rodota Trail I stopped for some more to drink and eat, and sweat. The air was dead, it was early afternoon and I still had nine more fucking miles to go.

I stopped at a gas station in Santa Rosa city limits and got another bottle of water and electrolytes and good grief was I excited to be drinking something cool for a change. Slogging along I thought “when I get home I should look up the symptoms of heat exhaustion.”

Stepping off the bike at my front gate I was so relieved to finally go inside, air conditioning! Sitting on my yoga mat and stretching I continued sweating, my head hurt. I didn’t want to overdo liquids so I took a shower, ate some fruit, and slowly started to feel like a person again.

The first 20 were a breeze, the remaining 32 were very hard earned.

There are few places quite like Sonoma county for cyclists. The number of avid road cyclists or mountain bikers that I know is staggering. Culturally we seem to do wine, beer, and cycling well in this part of California. I am not just training for AIDS/LifeCycle but also for me. I enjoy cycling and would love to get into sufficient shape to take on more tours and races, like the Levi’s Gran Fondo which is hosted in Sonoma county every year (next spring).

Who knows where I’m going next weekend, but I can assure you that I’ll be out there with the rest of the yahoos pedaling around some of our spectacular country roads, training up for ALC, etc.